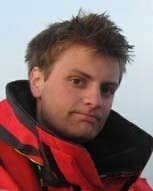 On: VanRullen and Macdonald (2012). PerceptualEchoes at 10Hz in the Human Brain

One day in 1958 the artist Brion Gysin was sleeping on a bus in the south of France. The bus passed a row of trees, through which the sun was shining. As the flickering light illuminated Gysin, he awoke and with his eyes closed, began to hallucinate, seeing:

“an overwhelming flood of intensely bright patterns in supernatural colours… Was that a vision?”.

By the turn of the decade Gysin was living with William S Burroughs in the flophouse in Paris that became known as the Beat Hotel. Gysin told Burroughs of his experience, and they decided to build a device to recreate the flickering stimulation. The ‘Dream Machine’ is a cylinder of cardboard, cut at regular intervals with windows, which can be spun on a 78rpm record player, a light bulb inside to throw off a flickering light.   The light flickers around ten times per second (10Hz). Some, like the poet Ginsberg (“it sets up optical fields as religious and mandalic as the hallucinogenic drugs”), claim to have experienced vivid hallucinations when seated eyes closed before a spinning Dream Machine (although, most devotees admitted that the effect was much stronger in combination with psychedelic drugs). 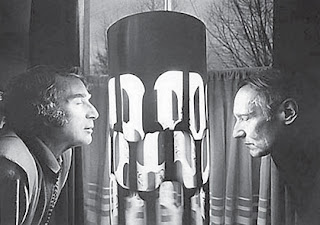 Gysin and Burroughs had rediscovered a phenomenon that had been known to scientists for some time. The great neurophysiologist Purkinje documented the hallucinatory effect of flickering light by waving an open-fingered hand in front of a gaslight. Another neuro-luminary, Hermann von Helmholtz, investigated the same phenomenon in Physiological Optics, calling the resulting hallucinations ‘shadow patterns’. In the 1930s Adrian and Matthews, investigating the rhythmic EEG signal recently discovered by Hans Berger, shone a car headlamp through a bicycle wheel and found that they could ‘entrain’ the EEG recording of their subject to the stimulation, in ‘a coordinated beat’. And from there investigation of the magical 10Hz flicker continued, on and off, until the present day (for a very readable review, see the paper by ter Meulen, Tavy and Jacobs referenced at the bottom of this post – from which the above quotations from Gysin and Ginsberg are taken; see also a relate post by Mind Hacks).

This week’s journal club paper is not about flicker-induced hallucinations. However, it does use EEG to address the related idea that there is something rather special to the visual system about the 10Hz rhythm. The paper, by Rufin VanRullen and James Macdonald, and published this month in Current Biology, used a very particular type of flickering stimulation to probe the ‘impulse response’ of the brain. They found – perhaps to their surprise – that the brain seems to ‘echo back’ their stimulation at about 10 echoes per second.

Macdonald and VanRullen’s participants were ‘plugged in’ during the experiment – electroencephalography (EEG) was used to measure the tiny, constantly changing voltages on their scalps that reflect the workings of the millions of neurons in the brain beneath. The stimulus sequence presented (with appropriate controls to ensure the participants paid attention) was a flickering patch on a screen. The flicker was of a very particular kind. It was a flat spectrum sequence, a type of signal used by engineers to probe the ‘impulse response’ of a system. The impulse response is the response of a system to a very short, sharp stimulation. Imagine clicking your fingers in an empty cathedral – that short, sharp click is transformed into a long, echoing sound that slowly dies away. This is the impulse response of the cathedral: VanRullen and MacDonald were trying to measure the impulse response of the brain’s visual system. Because of its property of very low autocorrelation (the value of the signal at one point in time says nothing about what the value of the signal will be at any other time), the kind of signal the authors flashed at their participants can be used to mathematically extract the impulse response of a system (for more details, see the paper by Lalor at al., referenced at the bottom of this post). 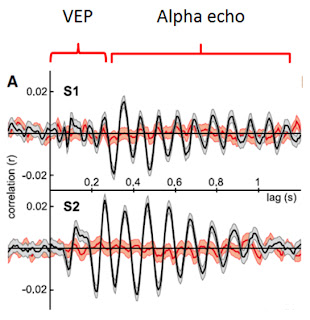 The grey curves are the cross-correlation functions, stretched out over time. Up until about 0.2 seconds you see the classic ‘visual evoked potential’ response, but after that time a striking 10Hz ‘echo’ emerges. The authors perform various controls, to show, for example, that these ‘echoes’ are not induced only by the brightest or darkest values in their stimulus sequence. They argue that because of the special nature of the stimuli they used, this effect must represent the brain actually ‘echoing back’ the input signal at a later time. In their discussion, they propose that this could be a mechanism for remembering stimuli over short periods of time: replaying them 10 times per second.

This is a bold hypothesis. Are these 10Hz reverberations really ‘echoes’ of the visual input, used for visual short term memory? We weren’t sure. We already know that the EEG resonates by far the most easily to flickering stimuli at 10Hz (see the paper by Hermann, referenced below), so despite the sophisticated stimulus used here, it is easy to suspect that the result of this experiment depends more on this ‘ringing’ quality of the EEG than on mnemonic echoes of stimuli themselves. We felt that in order to really nail this question you would need to show, for example, that our sensitivity to specific stimuli we have just been shown changes with a 10Hz rhythm in the seconds after we encounter it. However, this is the sort of thing that could be achieved with behavioural experiments. 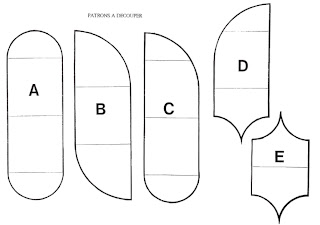 Perhaps a new theory of short term memories will emerge.

In the meantime, why not build yourself a dream machine and see if you can have your own visionary insights with the help of some 10Hz flickering light?  You’ll need the diagram below (blow up; cut out; fold into a cylinder), an old 78rpm record player, and a light-bulb.

NeuroImage, 2006: The VESPA: a method for the rapid estimation of a visual evoked potential.  Edmund C. Lalor, Barak A. Pearlmutter, Richard B. Reilly, Gary McDarby and John J. Foxe