In the news: Mind Reading 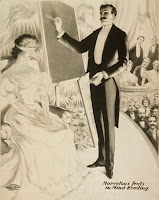 Mind reading tends to capture the headlines. And these days we don't need charlatan mentalists to perform parlour tricks before a faithful audience - we now have true scientific mind reading. Modern brain imaging tools allow us to read the patterns of brain activity that constitute mind... well, sort of. I thought to write this post in response to a recent Nature News Feature on research into methods for reading the minds of patients without any other means of communication. In this post, I consider what modern brain imaging brings to the art of mind reading.

Mind reading as a tool for neuroscience research 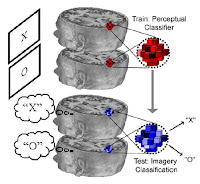 First, it should be noted that almost any application of brain imaging in cognitive neuroscience can be thought of as a form of mind reading. Standard analytic approaches test whether we can predict brain activity from the changes in cognitive state (e.g., in statistical parametric mapping). It is straightforward to turn this equation round to predict mental state from brain activity. With this simple transformation, the huge majority of brain imaging studies are doing mind reading. Moreover, a class of analytic methods known as multivariate (or multivoxel) pattern analysis (or classification) have come even closer to mind reading for research purposes. Essentially, these methods rely on a two-stage procedure. The first step is to learn which patterns of brain activity correspond to which cognitive states. Next, these learned relationships are used to predict the cognitive state associated with brain activity. This train/test procedure is strictly "mind reading", but essentially as a by-product.

In fact, the main advantage of this form of mind reading in research neuroscience is that it provides a powerful method for exploring how complex patterns in brain data vary with the experimental condition. Multivariate analysis can also be performed the other way around (by predicting brain activity from behaviour, see here), and similarly, there is no reason why train-test procedures can't be used for univariate analyses. In this type of research, the purpose is not actually to read the mind of cash-poor undergraduates who tend to volunteer for these experiments, but rather to understand the relationship between mind and brain.

Statistical methods for prediction provide a formal framework for this endeavour, and although they are a form of mind reading, it is unlikely to capture the popular imagination once the finer details are explained. Experiments may sometimes get dressed up like a mentalist's parlour trick (e.g., "using fMRI, scientists could read the contents of consciousness"), but such hype invariably leaves those who actually read the scientific paper a bit disappointed by the more banal reality (e.g., "statistical analysis could predict significantly above chance whether participants were seeing a left or right tilted grating"... hardly the Jedi mind trick, but very cool from a neuroscientific perspective), or contribute to paranoid conspiracy theories in those who didn't read the paper, but have an active imagination.

Mind reading as a tool for clinical neuroscience


So, in neuroscientific research, mind reading is most typically used as a convenient tool for studying mind-brain relationships. However, the ability to infer mental states from brain activity has some very important practical applications. For example, in neural prosthesis, internal thoughts are decoded by "mind reading" algorithms to control external devices (see previous post here). Mind reading may also provide a vital line of communication to patients who are otherwise completely unable to control any voluntary movement.

Imagine you are in an accident. You suffer serious brain damage that leaves you with eye blinking as your only voluntary movement for communicating with the outside world. That's bad, very bad in fact - but in time you might perfect this new form of communication, and eventually you might even write a good novel, with sufficient blinking and heroic patience. But now imagine that your brain damage is just a little bit worse, and now you can't even blink your eyes. You are completely locked in, unable to show the world any sign of your conscious existence. To anyone outside, you appear completely without a mind. But inside, your mind is active. Maybe not as sharp and clear as it used to be, but still alive with thoughts, feelings, emotions, hopes and fears. Now mind reading, at any level, becomes more than just a parlour trick.


"It is difficult to imagine a worse experience than to be a functioning mind trapped in a body over which you have absolutely no control" Prof Chris Frith, UCL [source here]

As a graduate student in Cambridge, I volunteered as a control participant in a study conducted by Adrian Owen to read mental states with fMRI for just this kind of clinical application (since published in Science). While I lay in the scanner, I was instructed to either imagine playing tennis or to spatially navigate around a familiar environment. The order was up to me, but it was up to Adrian and his group to use my brain response to predict which of these two tasks I was doing at any given time. I think I was quite bad at spatially navigating, but whatever I did inside my brain was good enough for the team to decode my mental state with remarkable accuracy. 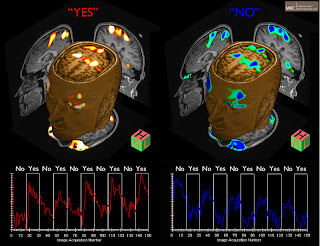 Once validated in healthy volunteers (who, conveniently enough, can reveal which task they were doing inside their head, thus the accuracy of the predictions can be confirmed), Adrian and his team then applied this neuroscientific knowledge to track the mental state of a patient who appeared to be in a persistent vegetative state. When they asked her to imagine playing tennis, her brain response looked just like mine (and other control participants), and when asked to spatially navigate, her brain looked just like other brains (if not mine) engaged in spatial navigation.

In this kind of study, nothing very exciting is learned about the brain, but something else extremely important has happened: someone has been able to communicate for the first time since being diagnosed as completely non-conscious. Adrian and his team have further provided proof-of-principle that this form of mind reading can be applied in other patients to test their level conscious awareness (see here). By following the instructions, some patients were able to demonstrate for the first time a level of awareness that was previously completely undetected. In one further example, they even show that this brain signal can be used to answer some basic yes/no questions. 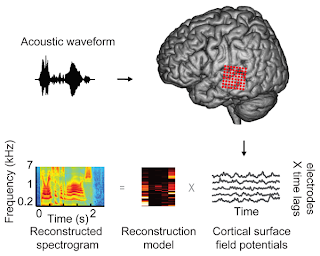 This research has generated an enormous amount of scientific, clinical and public interest [see his website for examples]. As quoted in a recent Nature New Feature, Adrian has since been "awarded a 7-year Can$10-million Canada Excellence Research Chair and another $10 million from the University of Western Ontario" and "is pressing forward with the help of three new faculty members and a troop of postdocs and graduate students". Their first goal is to develop cheaper and more effective means of using non-invasive methods like fMRI and EEG to restore communication. However, one could also imagine a future for invasive recording methods. Bob Knight's team in Berkeley have been using electrical recording made directly from the brain surface to decode speech signals (see here for a great summary in the Guardian by Ian Sample). Presumably, this kind of method could be considered for patients identified as partially conscious.