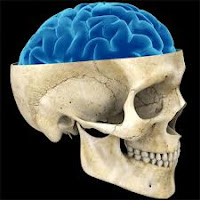 A major challenge in neuroscience is how to study brain processes that are securely encased within the skull. Over the last twenty years, there has been enormous progress in non-invasive brain imaging methods. In particular, functional magnetic resonance imaging (fMRI) and magnetoencephalography (MEG) allow researchers to measure brain activity from outside the head.

Although brain imaging methods allow us to peer inside the head and watch the brain in action, we also need to be able to perturb brain function to understand more fully what observed brain activity is actually doing. We will never understand the brain by just watching it - we also need to be able to poke around to see what happens when certain processes are disrupted. In formal terms, we can only verify causality by disrupting brain activity and observing the consequences. 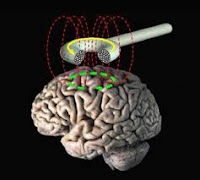 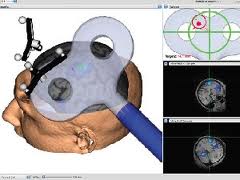 TMS is the only method currently available in human neuroscience to disrupt specific brain areas and measure the consequence on brain function. TMS has been in use in labs across the world for more than 25 years, and sophisticated methods have been developed for targeting specific brain areas (see neuronavigation, pictured right). Nevertheless, it remain relatively unclear exactly how best to set stimulate intensity.

Setting the right stimulation level is essential for safe and effective use of TMS. Over-stimulation can cause adverse effects, such as seizure. From an experimental point of view, over-stimulation also reduces the focality of disruption, therefore complicating the interpretation of any effects. On the other hand, under-stimulation could compromise treatment in clinical settings, and lead to false negative results in research. Poor control over the stimulation intensity also compromises experimental comparisons between treatment conditions. 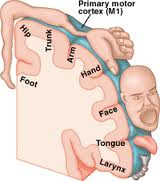 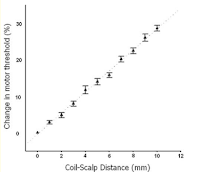 In a series of methodological studies performed with Chris Chambers and others, we previously explored the effect of skull thickness on brain stimulation. It is well known that the flux density of a magnetic field declines as a function of distance. As a direct consequence, if people have thicker skulls, they will require a higher intensity field at the scalp surface to activate underlying brain areas. To quantify this dependency, we varied TMS distance over motor cortex.


When TMS is applied to primary motor cortex, stimulation triggers a twitch in the muscle associated with the stimulated portion of the motor map (pictured left). This an extremely reliable and repeatable effect, and therefore provides a very useful tool for assessing the effect of TMS. We simply varied distance between the stimulation coil and the target brain region to characterise the relationship between distance and TMS effect (pictured right). From these initial studies, we suggested that TMS protocols could be usefully calibrated at motor cortex, and corrected for distance to derive a distance-independent estimate of cortical excitability. Distance-corrected levels could then be used to determine the appropriate stimulation intensity for 'silent' brain areas, such as non-motor brain areas for which there is no simple index of effective stimulation. 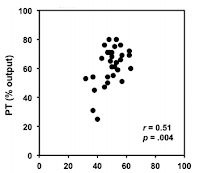 In conclusion, this research suggests that TMS intensity can be calibrated to distance adjusted motor threshold, and applied to other brain areas. For further information, please see our paper here, or contact me directly.

Posted by StokesBlog at 04:03 No comments: 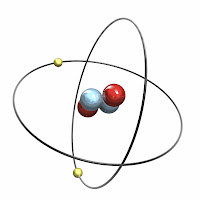 Posted by StokesBlog at 11:09 No comments: