In The News: The "Bionic Eye" 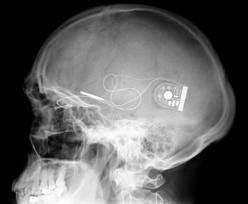 It is a big news story in the UK at the moment. Surgeons at the John Radcliffe Hospital in Oxford have implanted UK's first subretinal prosthetic device (see link). This is an exciting development toward restoring useful vision to people suffering retinal degeneration. According to the NHS website, the clinical trial involves a number of patients with retinitis pigmentosa, which is a progressive eye disease affecting photoreceptors (rods and cones). So far, the results are promising. Quoting from the NHS press release:

"When his electronic retina was switched on for the first time, three weeks after the operation, James was able to distinguish light against a black background in both eyes. He is now reported to be able to recognise a plate on a table and other basic shapes, and his vision continues to improve"

Although these effects might seem modest to the sighted, they could provide major improvement in the quality of life for those involved in the trial. To a fully blind patient, even partial vision could dramatically increase their independence. According to the manufacturer, after implantation of the chip the patient’s visual ability should meet the following criteria:

To achieve all these would certainly make a real difference to a fully blind patient. So, how does the device work? In general, there are two type of retinal implant being developed: epiretinal and subretinal. Both essentially work by converting light energy to electrical energy to stimulate intact retinal cells, which is normally done by damaged photoreceptors (rods and cones). The epiretinal variety consists of an external video camera that transmits a processed signal to the implant, which in turn activates the reintal cells corresponding to the pixelated representation of the image. The subretinal implant, used in this trial, is fitted behind the retina and microphotodiodes directly convert light into electrical impulses to stimulate retinal cells. The principal advantage of the subretinal device, everything is internal to the implant (except for a small power source fitted under the skin). To quote Professor MacLaren: 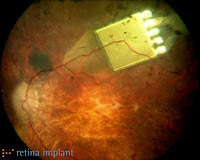 "What makes this unique is that all functions of the retina are integrated into the chip. It has 1,500 light sensing diodes and small electrodes that stimulate the overlying nerves to create a pixellated image. Apart from a hearing aid-like device behind the ear, you would not know a patient had one implanted."

Moreover, by directly stimulating retinal cells rather than ganglion cells results in a more direct and natural correspondence between the implant and the underlying biology. Essentially, this reflects a general trade-off principle in neuroprosthetics. The simplest and most effective devices (e.g., cochlear implants) utilize the existing organisation of primary receptor surfaces, and/or their close neighbours, thereby minimizing the engineering challenge of interfacing with the more complex neural coding schemes. But this only works if those structures remain intact. To by-pass the entire sensory organ and project directly to the cortex is an entirely different game.

Email ThisBlogThis!Share to TwitterShare to FacebookShare to Pinterest
Labels: in the news, neuroprosthesis