In the news: More neural prosthetics 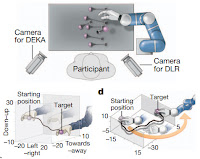 Last week we heard about the retinal implant, this week is all about the neural prosthetic arm (video). As part of a clinical trial conducted by the BrainGate team, patients suffering long-term tretraplegia (paralysis including all limbs and torso) were implanted with tiny 4x4mm 96-channel microelectrode arrays. Signals from the primary motor cortex were then recorded, and analysed, to decode action commands that could then be used to drive a robotic arm. According to one of the patients: 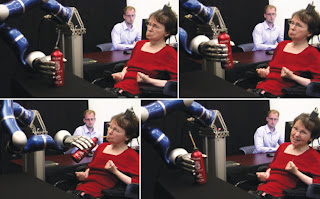 "At the very beginning I had to concentrate and focus on the muscles I would use to perform certain functions. BrainGate felt natural and comfortable, so I quickly got accustomed to the trial."

Plugging directly into the motor cortex to control a robotic arm could open a whole host of possibilities, if the even larger host of methodological obstacles can be over come. Neuroscientists have become increasingly good at decoding brain signals, especially those controlling action, and are continually fine tuning these skills (see here in the same issue of Nature for another great example of the basic science that ultimately underpins these kinds of clinical applications). The biggest problem, however, is likely to be the bioengineering challenge of developing implants that can read brain activity without damaging neurons over time. The build up of scar tissue around the electrodes will inevitably reduce the quality of the signal. As noted by the authors: 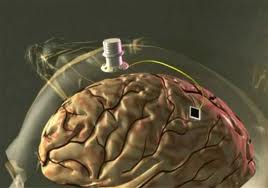 They go on to say that one of their experimental participants had been implanted with their electrode array some 5 years earlier. Although they concede that the quality of the signal had degraded over that time, it was still sufficiently rich to decode purposeful action. They suggest that:

"the goal of creating long-term intracortical interfaces is feasible"

These results are certainly encouraging, however such high-profile trials should not overshadow other excellent research into non-invasive methods for brain computer interface. To avoid neurosurgical procedures has obvious appeal, and would also allow for more flexibility in updating hardware as new developments arise.

Email ThisBlogThis!Share to TwitterShare to FacebookShare to Pinterest
Labels: in the news, neural decoding, neuroprosthesis